What is Atrial Fibrillation?

With atrial fibrillation, the SA (sinoatrial) node does not direct the heart’s electrical rhythm. Instead, many different impulses rapidly fire at once, causing a very fast, chaotic rhythm in the atria. Because the electrical impulses are so fast and chaotic, the atria cannot contract and/or squeeze blood effectively into the ventricle.

The goal of treatment includes restoring a normal heart rhythm, controlling the heart rate, reducing symptoms and reducing the risk of blood clots and stroke.

During the procedure, an energy heart doctor (cardiologist) delivers energy through the tip of the catheter to tissue that is targeted for ablation. The energy is applied in a circle around the connection of the left upper and lower pulmonary veins to the left atrium.

While the root cause of Afib is the misfiring of electrical signals in the heart, certain risk factors heighten the chance that atrial fibrillation will occur. These include the following:

High blood pressure, also known as hypertension, is the leading risk factor for stroke. Blood pressure is defined as the force with which blood presses against the artery walls as it circulates through the body. High blood pressure means the heart has to pump harder in order to circulate this blood. This can weaken the walls of the arteries and cause problems with circulation.

Heart valve problems (valvular heart disease) are a risk factor for Afib. Your heart’s valves are essential for proper circulation because they regulate the direction that your blood flows. The heart valves play an important part in delivering necessary oxygen to your body. Heart valves that don’t work the way they should can put your heart and other organs at risk.

Heart attack is another risk factor for Afib. A heart attack is the result of a sudden and complete blockage of an artery that supplies blood to your heart. Blockages are caused by a disease process throughout the arteries in your body called atherosclerosis, in which a fatty substance (plaque) builds up in the arteries. This plaque narrows the arteries, leaving less room for blood to flow.

Lung disease is one of the risk factors for Afib; however, lung disease is a general term for a number of medical problems relating to the lungs. These can include the following:

These are not the only forms of lung disease; according to the American Lung Association, there are multiple forms, all with various causes, treatments and symptoms.

In general, anything that stimulates the heart to beat more rapidly can increase the risk of Afib. Alcohol, caffeine, certain medications (including over-the-counter cold medicines) and tobacco are all substances that can increase your heart rate and bring on episodes of arrhythmia. Illegal drugs, such as amphetamines, methamphetamines and cocaine (among others) may also produce Afib.

In addition to keeping you from getting restful sleep and contributing to exhaustion and difficulty concentrating during the day, sleep apnea can contribute to the misfiring of the electrical impulses in the heart and to episodes of atrial fibrillation.

Cardiomyopathy, another risk factor for Afib, is a general term that includes diseases of the heart muscle. In cardiomyopathy, the heart becomes enlarged, thick or tough, meaning it does not beat as well. It is less able to pump blood effectively and more prone to arrhythmias, including atrial fibrillation. There are several types of cardiomyopathy:

The medical team at Advanced Heart and Vein Center is knowledgeable and well-equipped to diagnose, treat, and manage heart rhythm problems, including atrial fibrillation. For an evaluation and treatment plan for your A-fib, call our Westminster office today. 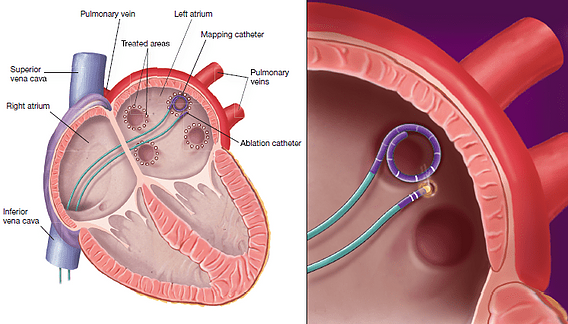