What is a pacemaker?

A pacemaker is a small device with two parts — a generator and wires (leads, or electrodes) — that’s placed under the skin in your chest to help control your heartbeat. People may need a pacemaker for a variety of reasons — mostly due to one of a group of conditions called arrhythmias, in which the heart’s rhythm is abnormal.

A pacemaker can often be implanted in your chest with a minor surgery. You may need to take some precautions in your daily life after your pacemaker is installed.

This type of pacemaker usually carries electrical impulses from the pulse generator to the right ventricle of your heart.

A dual chamber pacemaker carries electrical impulses from the pulse generator to both the right ventricle and the right atrium of your heart. The impulses help control the timing of contractions between the two chambers.

A biventricular pacemaker paces both ventricles so that all or most of the ventricular muscle pumps together. This allows your heart to pump blood more effectively. Because this treatment resets the ventricles’ pumping mechanism, it’s also referred to as cardiac resynchronization therapy (CRT).

Purpose of a Pacemaker

What a Pacemaker Does

Surgery to implant the pacemaker is usually performed while you’re awake and typically takes a few hours. Before the procedure, you are taken to a special room (called a preparation room or holding area) to start an intravenous (IV) line.

Most pacemaker implantations are done using local anesthesia to numb the area of any incisions. You may receive additional IV medication to help you relax. The implantation is done in a room with special X-ray equipment. Your chest is cleaned with an antibacterial soap, and an IV line is placed in your arm on the same side as the pacemaker.

During surgery, one or more flexible, insulated wires (leads) are inserted into a major vein under or near your collarbone and guided to your heart with the help of X-ray images. One end of each wire is secured to the appropriate position in your heart, while the other end is attached to the pulse generator, which is usually implanted under the skin beneath your collarbone.

Before you leave, your pacemaker is programmed to fit your particular pacing needs. A return visit is often scheduled to make sure your pacemaker’s settings are correct. After that, most pacemakers can be checked remotely using wireless technology. Using your cellphone or radiofrequency signals, your pacemaker transmits and receives information between you and your doctor’s office, where your doctor can access the data — including your heart rate and rhythm, how your pacemaker is functioning, and remaining battery life.

Remote transmissions can be made at scheduled intervals or at unscheduled times if your pacemaker sends an alert, or you can send a transmission if you have a concern. Remote technology means fewer trips to the doctor’s office, but you’ll still need to be seen by your doctor in person for scheduled checkups.

After your procedure to implant your pacemaker, your doctor may recommend that you avoid vigorous exercise or heavy lifting for about a month. You may have some aches and pains near the area where your pacemaker was implanted.

Pacemakers are a standard treatment for many conditions affecting your heart’s electrical system. By preventing a slow heart rate, pacemakers can treat symptoms, such as fatigue, lightheadedness and fainting. Because most of today’s pacemakers automatically adjust your heart rate to match your level of physical activity, they can allow you to resume a more active lifestyle.

The medical team at Advanced Heart and Vein Center is knowledgeable and well-equipped to diagnose, treat, and manage heart rhythm problems. Learn more about our services by calling our office at (720) 772-8040. 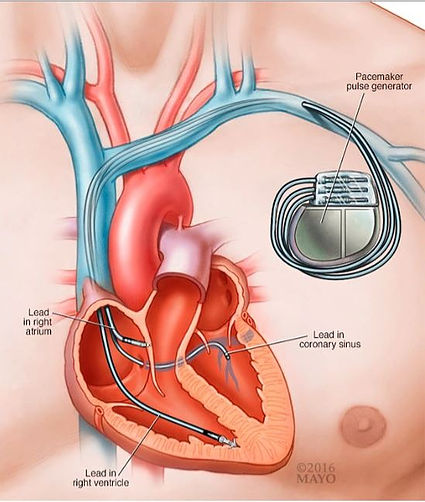