Chronic pelvic pain is very common in women and can potentially lead to significant disability. Approximately one out of every three women will suffer from pelvic pain at some point during their lifetime. It is described as “non-cyclic” pain lasting greater than six months in duration.
The good news is, a minimally invasive non-surgical outpatient treatment of one of the common causes of pelvic pain is available at Advanced Heart And Vein Center, where women can get the pain relief they seek.
“There are many different conditions that can cause pelvic pain, thus making diagnosis difficult,” explains Qaisar Khan MD, cardiologist at the Advanced Heart And Vein Center. “Women tend to go through multiple testing before seeing us in the office.”
Pelvic congestion syndrome (PCS), also known as pelvic venous insufficiency or incompetence, is one of the causes of chronic pelvic pain, and must be considered as part of the differential diagnosis.
The pain associated with PCS worsens when sitting or standing, and is relieved with lying down. It can be associated with varicose veins in the thighs, buttock regions, or vaginal area. 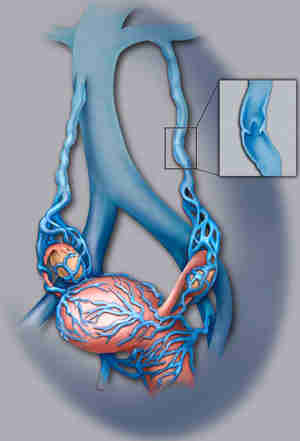 Chronic pelvic pain is very common in women and can potentially lead to significant disability.

Pelvic congestion syndrome is becoming increasingly recognized as a cause of chronic pelvic pain, and at Advanced Heart And Vein Center, we know how to provide the treatment of it and the relief that women seek

Some women may also experience pain with urination or during/after sexual activity. The condition is associated with ovarian and pelvic vein dilatation — veins being stretched beyond normal dimensions — resulting in varicose veins in the pelvis.
Dr. Khan is a specialist in the treatment of pelvic congestion syndrome. He uses the very latest diagnostic and therapeutic technology to manage this condition, treating it effectively with a minimally invasive outpatient procedure.

The cause of PCS is unclear. However, the possibility of anatomic or hormonal abnormalities or dysfunction can contribute to the development of PCS. The majority of women who are affected are between the ages of 20 and 45 years and have a history of multiple pregnancies.
It is believed that the hormonal changes and weight gain along with the anatomic changes in the pelvic structures during pregnancy can cause an increased pressure within the ovarian veins and weaken the vein wall leading to dilatation (the condition of being stretched beyond normal dimensions). Estrogen has been also identified to weaken the vein walls, thus predisposing women to PCS.
In normal veins, blood flows from the pelvis up toward the heart in the ovarian vein, and is prevented from flowing backwards by valves within the vein. When the ovarian vein dilates, the valves do not close properly, resulting in backwards flow of blood, also known as reflux.
Consequently, there is pooling of blood within the pelvis that leads to pelvic varicose veins and clinical symptoms of pain and the sensation of heaviness.

How We Diagnose Pelvic Congestion Syndrome

We recognize the need to consider PCS as a possible cause of pelvic pain in women. The proper diagnosis is often missed because women lie down for a pelvic exam, relieving pressure from the ovarian veins, so that the veins no longer bulge with blood as they do while a woman is standing.

Ultrasound: Abdominal and pelvic ultrasound is a vital initial step in the diagnosis of PCS because it can eliminate other common causes of chronic pelvic pain.

CT or MR: It is possible with both of these tests to visualize the abnormal veins within the pelvis. Since CT is associated with radiation exposure, it is not recommended for use in pregnant women.

Pelvic venography: This is considered the most definitive imaging modality for diagnosing PCS because it can identify the abnormal veins and the reversal of blood flow within the affected veins. This procedure is done by Dr. Khan in the hospital as an outpatient procedure.
Pain medication will be given prior to the start of the procedure to alleviate any minor discomfort. The procedure is minimally invasive and performed by placing a small catheter (tube) directly into the abnormal ovarian vein.

How We Treat Pelvic Congestion Syndrome

Pelvic venography is often performed as a diagnostic procedure but also may be performed in conjunction with treatment in the form of pelvic embolization.

Ovarian vein embolization: In this procedure, Dr. Khan places a catheter (tube) directly into the abnormal ovarian vein, as described above. He injects sclerosing agents into the pelvic varicose veins to occlude (seal) them.

Small metal coils or plugs are subsequently placed to block blood flow into the ovarian vein. This prevents the reversal of blood flow in the abnormal vein, which reduces the pressure within the enlarged pelvic veins.

If reversed blood flow is present within the other ovarian vein or within other pelvic veins, these vessels can be embolized, as well, in a similar fashion.

This procedure is typically performed on an outpatient basis, with most patients going home after a few hours of observation and returning to normal activity after the first week.

What to Expect after Ovarian Vein Embolization

Ovarian vein embolization is a non-surgical procedure that is an effective treatment for painful ovarian varicose veins.

Following the procedure, patients have mild to moderate pelvic discomfort which lasts for a few days. This discomfort resolves slowly over a few days, and the original pelvic symptoms resolve over the next few weeks. Symptom relief varies, with some patients experiencing 90% improvement.